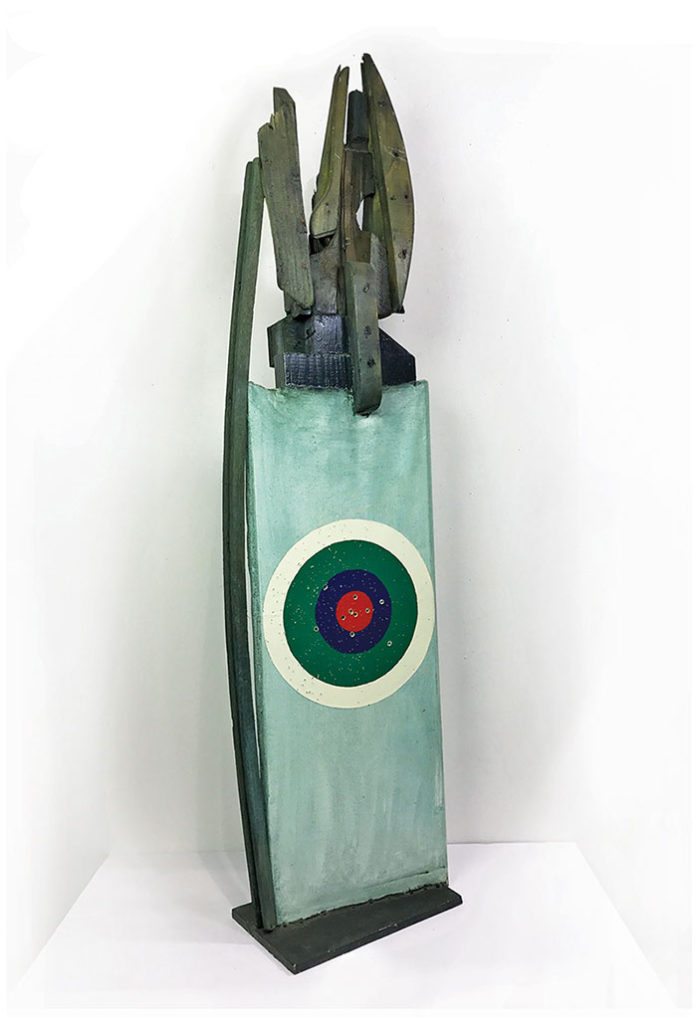 Airplane Installation: Saturday, May 6th at 1pm at the Emeryville Mud Flats
Tyler will be installing the Red Baron on the pier. We will leave the gallery at noon.

The Compound Gallery is pleased to announce a 50 year retrospective of the esteemed Emeryville mudflat artist Tyler James Hoare.  Last year, we exhibited a small grouping of Hoare’s works in our smaller Fabrefaction Gallery. This year, we are delighted to present an extensive solo exhibition of Hoare’s work in our main gallery.

Hoare’s early years at as an artist in residence at Xerox allowed him to experiment with xerox as a printmaking medium and use the xerographic process as a way to “build” his works in much the same way he approaches his sculpture.  Hoare looks for engaging objects in photographs, magazines, and various publications for his collage work much like he scouts for driftwood, man made debris, or discarded objects to create his sculptures.  The seemingly disparate objects in his 2D and 3D work achieve new meaning in Hoare’s imaginary narratives.

Hoare does not see his work as a precious commodity. Instead,  he leaves the fate of each piece to nature.  He places his creations into public spaces, and as a result, each piece interacts with nature and humanity as an autonomous performance piece.  Hoare has used the Emeryville mudflats, particularly the vestigial remnants of the old pier, as a gallery for his work since the 1970’s. This exhibition is an exciting moment where the public is able to appreciate his work close up.

This exhibition features an array of Hoare’s work spanning from the 1960’s through the present. The gallery will feature one of Hoare’s full sized airplanes-the Red Baron- in the Main Gallery, and on Saturday, May 6th at 1pm, he will move the airplane from the gallery to the Emeryville Mud Flats. The public is welcome to attend.

The collection of work on display will also include Hoare’s early collage work, masks, and large standing sculptures. Tyler will give an artist talk at the gallery on Saturday, April 1st at 4pm.

For More information on Tyler’s history, check out this excellent article at E’ville Eye.

This short film by Chris Marker showcases the artwork (including early work by Hoare) in the Emeryville mudflats in 1981.

b. 1940. Sculptor and printmaker, Born in Joplin Mo. attended the University of Colorado, the Sculpture Center in New York, the University of Kansas (BFA 1963), and CCAC.  He assembled figures in often humorous combinations of found and tooled objects, primarily of wood, coupling a basically cubist style with overtones of Surrealism.  Some of Hoare’s pieces occupied the anonymous, grassroots sculpture garden that began to flourish in the mid-1960’s on the mudflats of Emeryville.  In the 1970’s he was one of the earliest Bay Area artists to experiment with color xerox as a medium for printmaking.  -From Art in The San Francisco Bay Area 1945-1980 by Thomas Albright.