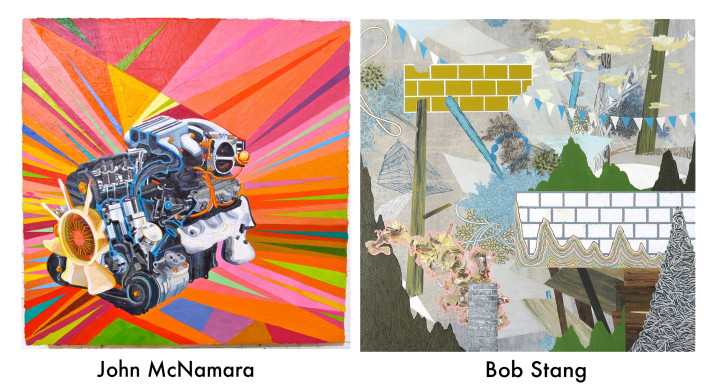 The Compound Gallery is pleased to announce the opening of Polychrome Stew, a polychromic exhibition of paintings by John McNamara and Bob Stang. We present to you, a stew, a salmagundi of brightly colored matter that consists of a dash of reality with a portion of fantasy, culminating in delightfully tasty neoteric paintings that are sure to enchant.

John McNamara’s new series of smaller paintings are taken from a 1992 visual dictionary-McNamara paints these familiar solitary objects as distinctive interpretations and places them into an abstract environment where the object and background coexist as a newly formed resplendent composite. Mcnamara’s larger painting is a form of painted collage that involves a process where he mounts several small photographs of one of his previous paintings onto a wood panel, and paints onto it, allowing some of the photographic image to come through— resulting in a skewed representation of the original painting.

Bob Stang creates dreamy compositions by placing familiar objects within his chimerical abstract landscapes. Stang’s works are influenced by the digital realm, yet leave a non-mechanical human impression.  Each painting is  fresh and unrestrained, a result of his impromptu painting style—he paints at will with no pre-determined end result in mind.  Stang often uses architectural elements in his works such as bricks, fences, and beams.  The combination of his selected imagery, recomposed, and decontextualized allows for new insight and interpretation into these recognizable elements.

Originally from Boston, John McNamara attended the Massachusetts College of Art where he received his B. F. A. in Painting in 1971 and his M. F. A. in Painting in 1977. He has been shown nationally and internationally and has been written about in Dialogue, Art News, Arts Magazine, Art in America, New Art Examiner, Art Forum, The Christian Science Monitor and Art Space among others. John received the distinguished Alumnus Award from the Massachusetts College of Art in 1986. He was the recipient of an AVA Fellowship in 1982 and a National Endowment for the Arts Fellowship in 1981. His paintings are in the collections of the Tucson Museum of Art, Rose Art Museum, Brandeis University, Smith College Museum of Art, Museum of Fine Arts, Boston, MA, Metropolitan Museum of Art, NY, NY, Honolulu Academy of Fine Art, Honolulu, HI, J. B. Speed Museum of Art, Louisville, KY, Tampa Museum of Art, Tampa, FL, Currier Museum of Art, Manchester NH, List Visual Art Center, M. I. T., Cambridge, MA, and Wellesley College Museum, Wellesley, MA, among others.

Bob Stang is an Oakland native and received his BA in Art Studio from UC Santa Barbara. He has had solo shows at HANG Gallery in San Francisco, Unframed Freedom in Fairfax, CA, Brett Wesley Gallery in Las Vegas, NV, and UCEN Gallery, Santa Barbara, CA; 1994.  He has published cover art in  “The Auxiliary Time of Being”, by Mario Susko, Harbor Mountain Press; 2016 and “Framing Memories”, by Mario Susko,Harbor Mountain Press; 2011.