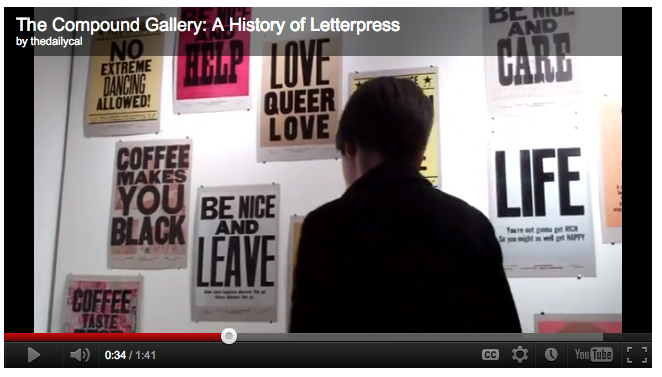 12 Nov Daily Californian on The Art of Letterpress

The Compound Gallery & Studios in Oakland is a comforting place. They have an affable staff, a rich display of chandelier lighting and a pleasant soundtrack of 1920s jazz. It was strange then, on Saturday evening, to see the words “FUCK YOU! I’LL FUCK MYSELF” in bold black print near the doorway as guests poured in to admire the opening of their new exhibit, “The Art of the Letterpress.”

This audacious statement was only one of the several daring posters by prolific Alabama-based letterpress artist Amos Kennedy that punched some color into the otherwise stark, white walls of the Compound. Amid the brightest hues of pinks, yellows and greens, Kennedy’s big, black texts screamed messages of moral wit. “LADIES NO! FIGHTING IN THE BATHROOM” stood right above the more succinct, but also stranger “COFFEE MADE ME GAY.” They were cheeky, refreshing and brazen in their immense, sans-serif fonts, but they were also thoroughly modern.

Not two feet from Kennedy’s presentation were items and texts more archaic and less clear. There was the chase, the stick and the brayer. To the unfamiliar mind, these were relics from another time, another place. But, for the printer, these are essential tools that have gone largely unchanged since  printing began with Gutenberg. Next to Kennedy’s works, these antique apparatuses showcased the theme of the exhibition. As fellow Compound artist Matt Reynoso explained, the intent of their show was “the mixing of the old world and the new.”

Everywhere you looked in the gallery and studios, this motif was present. In one corner, the works of Lisa Rappoport utilized all the techniques of the traditional trade. All the hallmarks were present: a clean, serifed typeface, adequate balance between the space of black ink and the white space of the page, the use of hand-made paper. Only when you stepped back and looked at the entire piece did you see its novel design. The text was set in the shape of two eyes, with lines like “He beetled his were thick eyebrows” actually placed in the form of those pesky, above-eye arches.

Adjacent to Rappoport’s pieces were the captivating fantasies of artist Bryan Kring. In his creation, “The Fall,” a person in an old, diving bell outfit seemed to be floating above the clouds of an urban skyline. The text below it reads: “It takes a long time to hit the Earth when you fall from your spaceship.” Like Rappoport, Kring’s piece integrates the anachronism of the diving bell with the modernity of space travel. But, this constant matter of old and new wasn’t exclusive to the gallery. What makes the Compound an intriguing place lies beyond its striking showroom. In the back, behind the hallway of other artworks, past the “The Admiral Dot Miniature Gallery” (a literal miniature gallery viewed through a hole in the wall) and after artist Lena Reynoso’s gallery of debonair, presidential portraits is the studio. Here is where the real artistry of the letterpress takes place. Old, wooden blocks of carved type sat above the iron-cast printing presses forged decades ago.

Right next to these objects of olden times were woodblock prints freshly dried. They had just been made and the potent smell of ink was still present in the air. As adults, kids and even dogs crowded the Compound, life teemed amidst these timeworn presses. With a stunning selection of varied pieces and artists, the Compound Gallery’s “Art of the Letterpress” ensures that the long-established process of print is far from dying out.