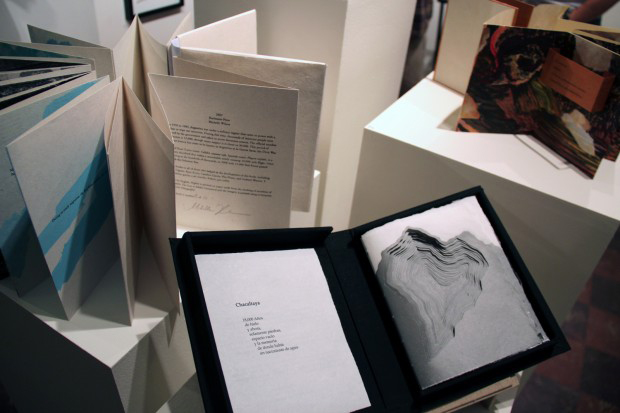 At the Compound Gallery, a new show explores storytelling and art

In a group show at the Compound Gallery & Studios titled “The Artist as Storyteller,” artist and curator Alison O.K. Frost has assembled a collection of works that tell viewers stories, leaving them to interpret what the artists mean to say. Multi-paneled pieces marry words and images in a way that is simultaneously familiar and abstract.

When thinking about the show, Frost drew inspiration from a most unlikely place. “I started thinking about how many artists working today grew up with and our first visual influences coming more from comic books and movies than from going to museums,” said Frost.

Make no mistake—despite this source of inspiration, this is no collection of pop art.  Frost used this idea as her jumping-off point to curate a show where artists working across multiple panels of various sizes and shapes would create an ongoing narrative. But the body of work from each artist stands alone as a discrete unit at the show, and can be gazed upon in any order.

Frost chose the five artists who created this collection because they already work with words and stories and had a way of breaking up stories in unique and often breathtaking ways. But their work for this show runs the gamut from projects made solely with words to those that contain no words at all. In this exhibit, two Twitter novels from Pamela Matsuda-Dunn’s prolific online series of novels make a reverse migration from digital to the printed page. (Matsuda-Dunn writes one new seven-chapter novel a week; each chapter is written as a single Tweet.) Each 140-character chapter is displayed on the gallery’s walls as an object in its own frame. One of the miniature tomes chronicles the entire birth and death of a relationship.

Alison Tharp’s collection in the exhibit is of ink-sketched caricatures of the people and conversations she witnesses as she goes about her day. These analog Instagrams reveal hilarious and thought-provoking snapshots from the lives of the many characters who call the East Bay home, from a set of middle-aged identical twins arguing over what to buy their father for dinner to a man with a wardrobe malfunction that may have been intentional.  It is clear that Tharp’s sketch book, pen, and dry quirky sense of humor are her constant companions wherever she goes.

Michelle Wilson’s stories printed on her handmade paper are beautifully illustrated by her lithographs. Each book is delicately arranged on a pedestal like sculpture, so much so that viewers must lean in to read the narratives without touching the work.  The story “Vueles”—Spanish for “flights”—delivers a sobering gut punch as Wilson deftly combines the story of the cross-continental migration of the endangered Red Knot birds with the story of the disappeared political prisoners during Argentina’s Dirty War.  In the story, the Red Knots fly non-stop from Wilson’s native Argentina to Delaware Bay, where she was living at the time.  No one knows why, but many of them drop dead into the sea during the migration, just as during the Dirty War, many of the disappeared were captured by the military junta and dropped into the ocean, never to be seen again.

John Watson’s photographs are a mosaic of two discrete scenes that are combined in a checkerboard pattern.  This methodology creates three photo art pieces in one: the two originals, and the abstract combination of colors and shapes. Watson’s work poses the toughest challenge to the viewer.  It is easy to tell that there is a combination of two photos, but difficult to tell what those originals may be. It creates a way for the viewer to project their own narrative on this combination, as this piece is word-free.

Matthew Pugh’s contribution is a combination of drawings with text and sculptures.  The gloomy dour–faced protagonist carrying a chrysalis on his back literally breaks the fourth wall by making multiple additional appearances in a series of sculptures crafted together using mixed materials.

Those who would like to take home a piece of the show can do so in the form of the companion comic book Frost created for the show. She asked each artist to create a separate work that might relate to what they had in the show, but would be a complete story.  Matsuda-Dunn illustrated one of her Twitter novels.  Pugh used a story he had already been developing with his drawings and the sculptures, but made it a cohesive narrative.  Frost wrote and illustrated a short comic about each artist and put them between the stories.

Frost chose that format because the influence of comic books helped this collection to come into fruition, and she felt that taking home a comic book would be an affordable acquisition for all of the gallery’s visitors. “I didn’t want it to be exactly like the show,” said Frost of the take-home book.  “I wanted it to be a separate show that you could take home and have a little art show that you could take home and have an art show to look at when you’re by yourself.”

Gallery visitors are invited to make their own contributions as well.  In the display area for the gallery’s own studio artists, a collection of quills and inkpots

instruct visitors to write their own stories related to the art and pin them underneath the piece.  These postings found their way out into main “Artist as Storyteller” show, particularly around Tharp’s pieces, where conversations began to form regarding the characters she had sketched and their shenanigans, becoming a rare opportunity for gallery visitors to contribute to an installation in progress and become storytellers themselves.

Frost came to Oakland by way of Brooklyn about five years ago.  She is one of the studio artists at the Compound and has curated other shows for Compound owners Matt & Lena Reynoso.  Curating this show seems to have whetted Frost’s appetite for being a storytelling artist.  When asked about the future, Frost said, “I would love to do more little books.”