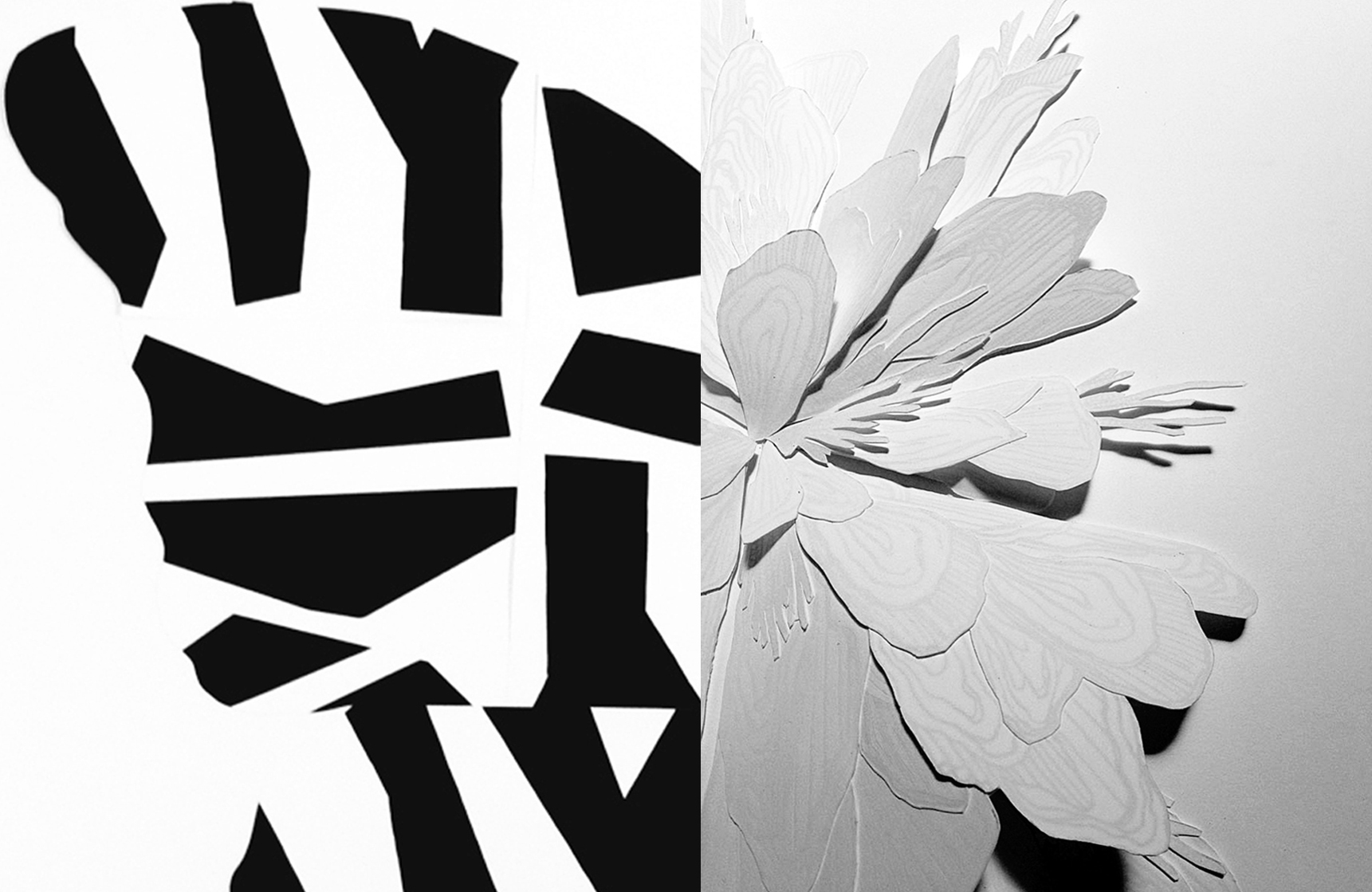 25 Jun Hiding in Plain Sight in the Artists Gallery

Mary Burger’s print-based installation Razzle Dazzle Melanism ponders biomimicry as natural defense mechanism, technological innovation, and artistic strategy.  Immediately the work visually assails you with its stark graphic formalism and larger than-life scale, but don’t let that distract you from the content. The title of the project and bold patterns it employs reference a style of camouflage used to disguise British and American naval battleships during World War I. Reconfigured in the shape of butterflies, the patterns remind us that human strategies of disguise often take cues from visual trickery in the natural world. But what Burger’s synthesis of the two really shows us is that there is reciprocity between natural and cultural evolution. The phenomenon of Industrial Melanism – the darkening of moths’ wings in response to environmental degradation caused by an outpouring of soot into the atmosphere during the height of the Industrial Revolution – is a prime example of this. In her own words, Burger explains that the project began with a question of “what it might mean to conceal oneself in a time of escalating surveillance,” and took form as she searched for a visually compelling way to “think about threat, vulnerability, and self-protection.” What results from her inquiry is a skillful pairing of political and natural history that together reveal a number of thorny cultural  issues, but don’t overtly criticize or make any grand statements about them. Rather, the work prompts us to consider the information she’s assembled and draw our own conclusions.

Anna McNeary uses collage and pop-up book structures to introduce new aspects of  dimension to traditional letterpress printmaking. With these techniques she creates ethereal dreamscapes populated by delicate biomorphic sculptures that vaguely  resemble the subtle textures and patterns of coral, feathers, wood, stone and other forms found in nature. McNeary, however, generates her own unique biota endemic to a more interior landscape, a paradoxically still and active psychological space filled with organisms familiar yet distinct from what we already know. The push-pull between real and surreal encourages you look past the inherent beauty of the pieces and wonder about the wild forces at play in nature; introducing a slightly unsettled feeling. McNeary’s approach to concealing the potential menace of that which is beyond our control with an aesthetically pleasing façade is similar to tactics employed by nature itself; think of carnivorous plants. Befitting of the subject matter, McNeary morphs flat paper into something unexpected through her artful manipulation of materials and the interplay of these materials with light and the resulting shadows cast by and back onto the work itself. Upon further inspection of what appears to be a blank sheet, the viewer discovers a bloom of pattern or a textured expanse with a vitality of its own. McNeary explains that this ongoing body of work is her “comment on the unnoticed presences that fill the quiet, small spaces in our world.”