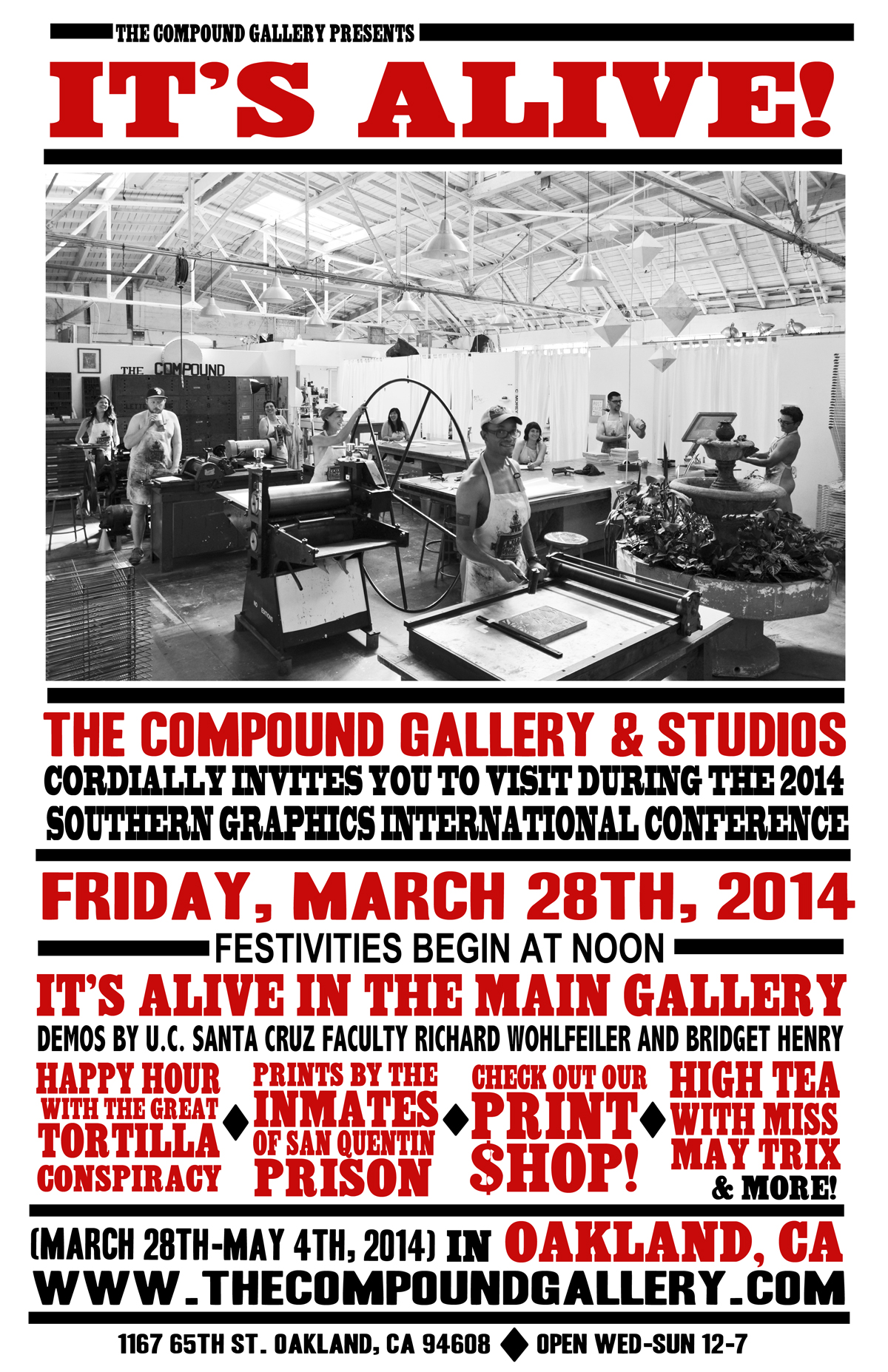 Posted at 19:43h in Past Shows by compound
0 Likes

The Compound presents an epigenetic take on multiplicity and singularity.  This large scale printed installation unfolds across the gallery like a self generating protein.  The living nature of this grand collaborative experiment seeks to reveal links between past, present and future conceptions of the indirect mark. Traditional ideas of artistic production are tackled and driven to the ground in this multi media extravaganza of print production. The notion of multiples is manifested as a literal specimen of print techniques.

The installation is one piece, and it is many.  It is individual and it is whole. Patterns emerge from seemingly disparate pieces, as artists attack and blend concept, form and technique.  We invite the viewer to emerge from the fray with a cohesive array of eye and mind candy.

Our neighbors Clif Bar are giving away their delicious bars to our Artletes and guests!

Free ruler with any purchase!

Free flags for the first 80 guests! 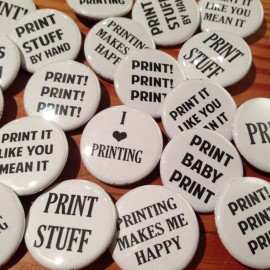 Free buttons to the first 100 guests!

ALONG THE PATHWAY FROM KALA TO THE COMPOUND GALLERY: Nomadic Habit: A crew of East Bay artists and cooks are coming together to inhabit a piece of land along the corridor between Kala and the Compound. Even as locals, this section of land feels unfamiliar and obscure. There we will install a temporary oasis where we serve and print with foods which stain. Visit our tent and take a photo on your way between the studio-galleries. #nomadichabit 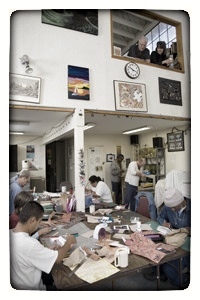 San Quentin State Prison has the last remaining art program in the state after the entire program which employed more artists than any other program statewide was destroyed by Arnold Schwarzenegger. The current art program is called the Prison Arts Project and is funded by the non-profit, William James Association. Among the several programs is a printmaking class started by Katya McCulloch in 2005.  The program focuses on linocut prints and artists books. Several prints have been accepted for inclusion in the permanent collection of the Library of Congress, including Blocks Off the Block, a 2010 edition of 35 hand-bound and hand-printed books of original linocut prints. The Tower Book was awarded the blue ribbon at the 2009 Marin County Fair Fine Art Exhibit. A collaborative piece on censorship, “Ill of Rights,” created by SQ printmakers and printed at SF Center for the Book’s ROADWORKS: Steamroller Prints in 2008, was selected for the County Fair Fine Art Exhibit. Since 2008, Art Hazelwood has been a visiting artist at San Quentin for several projects in Katya’s class. Katya and Art will curate an exhibition of prints by inmate artists that shows their dedication to the craft of printmaking and the power of their expression.

ON THE BUILDING: Woodcut Challenge: Yeh Vs. Hazelwood 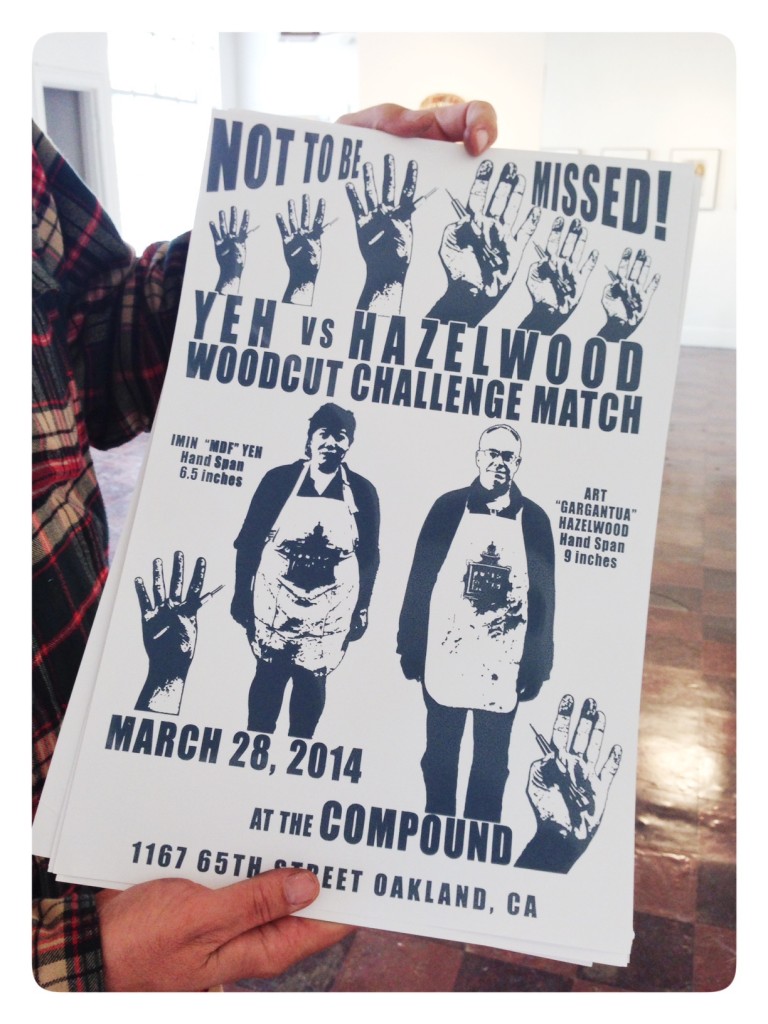 Upstart to the Woodcut Battle Arena Imin “The MDF” Yeh, has laid down the challenge and list of secret carving tools. It’ll be a fight to the finish in 2014’s WBA fight of the Bay Area. Both adversaries have their own satirical strengths, and neither can afford to simply run through their paces. You won’t want to miss Yeh vs Hazelwood 2014!

Resume: called Art “Gargantua” Hazelwood out from his long hibernation to compete in a truly sensationalistic woodcut bout. Standing just shy of 5 feet 2, Yeh is a powerhouse in the use of bold graphics and conceptual right hooks. Hazelwood, standing at a lethargic 6″6′, using a doggerel form of undercuts, is famous for dirty tricks and a long list of secret carving tools. It’ll be a fight to the finish in 2014’s WBA fight of the Bay Area. Both adversaries have their own satirical strengths, and neither can afford to simply run through their paces.  You won’t want to miss Yeh vs Hazelwood 2014!

Gold Diggers – an unlikely story of treasures found and fabricated. A large-scale installation by Bridget Henry. Bridget Henry has been exploring the possibilities of woodcut printmaking since 1994, and continues to be enthralled with this alchemical process.  She is a graduate of UC Santa Cruz and the recipient of the 2001 James Phelan award in printmaking.  Bridget works in the printmaking studio at UC Santa Cruz and has taught relief printmaking at Cabrillo College Summer Arts Program, California Art Education Association, Art League of Santa Cruz, Idyllwild Art Academy of CA, and out of her home studio on the north coast of Santa Cruz, CA. Her recent work includes an outdoor installation of nine large –scale prints on the walls of the Satnta Cruz Public library.

Richard Wohlfeiler teaches print media courses at UC Santa Cruz. He works with a variety of approaches, including relief, intaglio, plate, photo and waterless lithography, and digital printmaking. His current interests involve the fusion of traditional and digital methods. In recent work, he has been exploring the possibilities of using a laser cutter to cut relief blocks for images designed on the computer and for making papercuts.
DOWNLOAD DEMO PDF: Using a laser cutter to produce matrices for relief printing 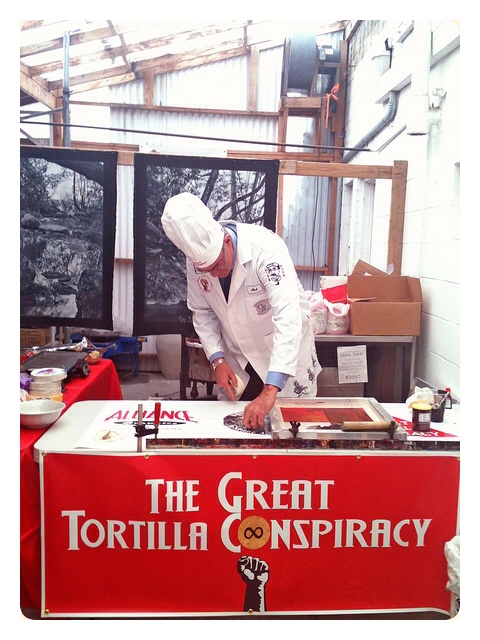